Sadly, we're coming to the end of our India trip. 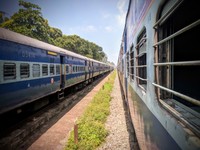 We travelled to Alleppey by a very hot and definitely not air conditioned train.
Alappuzha (or Alleppey) is famous for its house boats and sprawling backwaters. A huge network of waterways that connect some of the remotest parts of the region.
We were keen to stay on a houseboat but decided that the cost was a little too much for us budget travellers.

So alternatively we took a ferry boat from Alleppey to Kottayam about 15 km away. The trip was a wonderful peek in to local life, but after three hours we were starting to get quite uncomfortable on the hard wooden seats!
The ferry was much like our own bus services at home with many stops.
We were unsure of which jetty to get off from. (We knew none of the stops were near the town, we would have to get a rickshaw the rest of the way.) Thankfully there was a very young Indian couple who appeared to be on a date that could speak a little English. 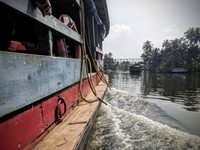 Being in a bit of a helpless position we asked for help hoping we were not disrupting their day too much.
Turns out they had the same plan as us! So when we disembarked from the ferry the four of us shared a extremely cosy rickshaw in to Kottayam town.
The young lady, Angel, knew of a restaurant so we trekked across town to find it. After about thirty minutes we found the place and took our seats. It felt like we had found a real locals café, the place was bustling with people coming and going and the volume of general conversation quite high.
After our delicious Thali (We have quite enjoyed these, even if they have blown our heads off!) our friend Angel suggested we get a local bus back to Aleppey.

A short walk later we found the bus station and waited for the announcement for our bus.
While sat in the very hot waiting room Scott struck up a conversation with an older local gentleman who spoke a little English. After explaining that he had learned to speak English in the UK Scott asked him about the English colonialism of India and if it was a good or a bad thing. Surprisingly he suggested that it was a good thing and said that India had pretty much gone to waste after the English left. He praised our necessity for bureaucracy and how it keeps things working and the machine well oiled. And regarded the introduction of the railways, postal service and local government has helped the country hugely.

When our bus was announced finally (Thanks to Angel who heard the tannoy. We would have missed it as it came over in Indian!), we raced to find seats only to discover that they were all occupied. As the elderly and women had priority Scott had to stand the entire 2.5 hour hair raising journey as the driver raced from town to town through the Indian countryside.
We now know why it is custom for locals to hold on to the seat in front…

Indian bus drivers are prone, without warning, to slamming on the brakes!
After a few days we headed for Kochi. We had heard that it is a little more pleasant to stay around Fort Kochi rather than in the built up city so we hired a rickshaw to take us across the island bridges to our destination. Kochi (also known as Cochin) is a city in southwest India's coastal Kerala state. 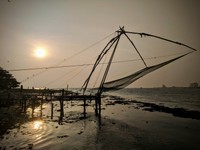 It has been a port since 1341, when a flood carved out its harbor and opened it to Arab, Chinese and European merchants. Sites reflecting those influences include Fort Kochi, a settlement with tiled colonial bungalows and diverse houses of worship.
Cantilevered Chinese fishing nets, typical of Kochi, have been in use here for centuries. 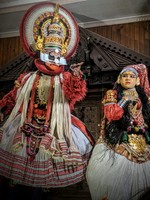 On our final evening in Kochi (And indeed in India!) we bought tickets to a local Kathakali theatre show with wonderous costumes and face decoration that took so long to apply that the theatre opened 2 hours earlier so audiences could watch the performers get ready.
The actors put tender seeds of sollanum pubescence into their eyes to make their iris’s look black which gave the performers a strange comic like quality on top of the makeup.
To make things a little easier for the audience of mostly Europeans and Americans we were treated to a short demonstration of the explicit eye and hand gestures that would convey the emotion of the actor. This was particularly helpful as the performance was entirely without spoken word with only a drum accompaniment.
Tomorrow we set off for Sri Lanka!

Previous Next Table of contents

Comments on this blog entry are now closed to non-Travellerspoint members. You can still leave a comment if you are a member of Travellerspoint.

If you aren't a member of Travellerspoint yet, you can join for free.