We weren’t quite sure what to expect when we flew into Sri Lanka. The country is still in deep political turmoil from the last civil war. With some confusion over who is their current legitimate prime minister.
Excuse my ignorance (But that’s why we’re travelling!) but Sri Lanka was a lot more developed than we had imagined. 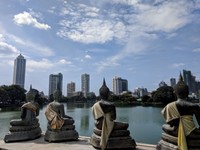 We observed that China has been investing heavily in the infrastructure and business development, something we have seen a great deal of throughout Asia.
Our flight landed late in the afternoon. Another two hour coach ride in to Colombo city centre and then an extortionately overpriced rickshaw to the outskirts saw us finally arrive at our home-stay. 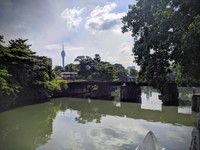 The owner welcomed us and treated us with warm hospitality. When taking our usual rooftop recce he came and joined us and spoke at length about the troubles his country has been facing. It also gave us an opportunity to share with him the craziness currently happening in the UK.
The following day we took the local bus back in to the city centre. A busy and modern place that still retained remnants of its old Dutch colonial past next to high rise buildings of commerce and a huge lotus tower overlooking the city. As expected, there were still many temples and Wats to explore. 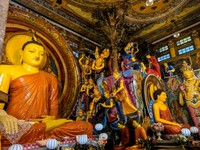 The first temple we visited appeared to be more of a Buddhist museum than an actual temple. The main room was currently being repainted in magnificent colours. Garish and beautiful all at the same time! 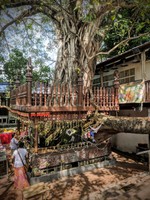 Passing through the main room to the small courtyard outside stood a sacred tree with what appeared to be wooden structure at its bass. While we looked on we saw many people make offerings of flowers or water and give silent prayer to their deity.
Taking taxidermy to the extreme the temple housed a stuffed elephant! Apparently the elephant lived in the temple and was loved by all who attended so when the elephant eventually passed away it was decided that it should be stuffed and put on display so future guests can enjoy it’s presence. 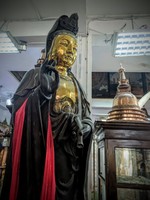 Across the small complex was a store for all the weird and wonderful things followers had donated to the temple. It looked more like a bric-a-brac store except some of the items were clearly priceless. It even boasted to have Buddha’s footprint and the smallest Buddha statue. (In town? In Sri Lanka? In the world? Who knows, it didn’t say!)

Later we stopped for a cup of tea. (We are in Sri Lanka after all!) It was clear that the café was serious about their tea when the tea was served with a sand timer to time the brew to get the exact strength required!
After two days in Colombo we set off to begin our tour of Sri Lanka.

Link to our Colombo Gallery here

Previous Next Table of contents

Comments on this blog entry are now closed to non-Travellerspoint members. You can still leave a comment if you are a member of Travellerspoint.

If you aren't a member of Travellerspoint yet, you can join for free.